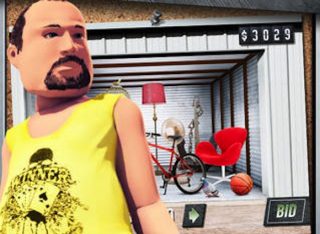 There is certainly nothing wrong in taking an idea and running with it as far as you can, and this is certainly true of the latest development in the current storage auctions media craze, which is nothing less than a video game which simulates the storage auction process. The game is called Auction Wars: Storage King, available for Apple and Android mobile devices, and is free if you want to give it a go.

Auction Wars: Storage King, developed by British company GameDigits Ltd and given the thumbs up by Storage King storage company, sees the gameplayer bid for storage units against other characters. The aim is to accumulate a wide range of collectable items and move on to other auctions with your earnings. In true video game style there are other assorted achievements to unlock, the potential to involve your friends in a bidding war, or a true battle over the internet against total strangers. As such, the concept has a bit of life in it, not the least is a tiny bit addictive. Indeed, the game has enjoyed millions of plays worldwide, so it seems that playability, the big x factor of video gaming, is certainly present here.

You might be thinking at this stage that there is only room in the world for one video game about storage auctions, but in fact you can find several confusingly similar titles by other gaming companies, who see the potential in developing software based around the popular storage auction TV show. Here is the Facebook game Storage Auctions:

Next up: Storage Auction Legends

And how about Storage King: Jesse McClure Edition

It could go on forever. Who’s to say how similar these games are, but there’s certainly people willing to play them. If the self storage industry is glamorous enough to make it in videos and the big screen then we could think of a broader range of future video game titles for self storage fans. Here are a few of mine:

5. Alien: In Storage No One Can Hear You Scream

6. Doom: Storage Units expansion pack (I can’t believe nobody made one?)

And so on…let me know yours!