Is There A Recommended Way to Store Beer? 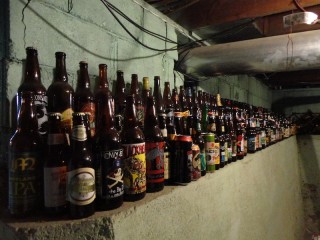 Unlike wine, which has a long provenance and all sorts of traditions associated with it, the international craft beer movement is relatively young and right now is seeing a large boost in popularity. In the hunt for new breweries and exciting new flavours you may find yourself falling in love with a particular microbrew and wanting to keep several bottles for later. Given the limited runs and the ethos of progression in the brewing scene, a beer that is prevalent one season may already not be made any more by the next, so it is wise to stock up and store. But how should beer be stored?

The chief advice is to keep beer in the dark and cellar cool. This is advice that extends far back into European monastery days, where beer was considered “liquid bread” and part of the daily diet. Keeping beer in the dark is exactly why beer generally comes in a coloured bottle or a can – some of the molecule chains that impart flavours can be broken down by light and thus reduce the impact of flavour. The question of temperature is more of a subtle one though. Many people like their beer fridge cool, but its’s not the way to store long term. Beer kept too cold too long starts to lose its clarity and become hazy. Too warm and this speeds up any reactions that are ongoing in the bottle – this is hazardous if you are storing bottle conditioned beer containing live yeast, and I have had two bottles literally explode from the pressure when they were stupidly displayed, just for a few days for showing-off purposes, in a warm glass fronted cabinet one summer.

You may find therefore that a cellar or a cupboard in a cool part of your household replicates these conditions fairly well throughout the year. If you have the bonus of a self storage facility near you, then you can ask them if they offer any climate controlled solutions in the region of 11 degrees Celsius.

Store upright or lengthways is the next question. Some argue that since wine should be stored lengthways to save the cork, then so should any corked beer. However a lot of beer aficionados disagree on this one, blaming any cork issues on the cork itself. History has shown a wide range of beer storage styles, so it seems nobody down the ages can agree on this. I personally just store upright, it takes up less ground storage space and one can argue that having less exposed surface area of the beer slows down oxidation of the product.

Are there taste benefits to storing beer long term? Well yes, flavour can improve, or at least new flavours can evolve. But this can only really happen noticeably if the beer is bottle conditioned with priming yeast that can perform a secondary fermentation. It is also worth experimenting on this front only with beers on the higher ABV range, with a heavy malty backbone. Beers that are lighter in style or that obtain most of their flavour characteristics from hefty hopping will not benefit from long term storage. You may find that at around 2-3 years of storage, new port-like characteristics will emerge in a bottle conditioned beer, which will add a touch of class to your sipping. It is fun to line up beers from different vintage and see how they compare.