The 1995 Self Storage Art Installation 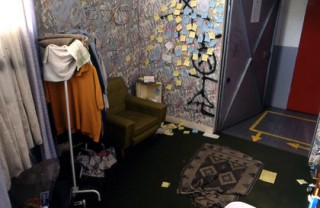 No this isn’t a badly timed photo of my living room. It is in fact a recreation of a student bedsit in a self storage facility. And it isn’t borne from an ill advised housing scheme either. Let me explain.

In the mid-90s, Acorn Storage Centre in Wembley was overrun with artists. Not by chance, but through deliberate arrangement. The Artangel group, a key British arts funder, had approached well known musician, sound designer and artist Brian Eno to create a work across a number of the rooms in the centre. This was such a large undertaking that it eventually became a project involving two dozen Royal College of Art collaborators, working across various fields of discipline. The project was sonically augemented by Brian Eno and New York musician Laurie Anderson who provided some spoken word pieces.

Looking at it now, it must have been an exciting project. 1990s were a big time for the British art world with many artists emerging with bold ideas and in some cases taking the media by storm. Many this day still enjoy the same notoriety and recognition. Not only that, but if you have ever spent time in Wembley, you will be familiar with winding silent roads leading to factories and warehouses. The place has a very different, almost negating, vibe to that which it is most famous for, the stadium and concert arena. The project must have had an eerie, cold and obscure quality to it, brought on by its sole place in the greater scheme of London. Indeed, the obscurity of self storage and not knowing what exists behind the metal shutters was a key influence.

The many rooms of this exhibition were pinpointed with yellow tape on the floor of corridors. Going into a room you were never sure what to expect. One contained an Egyptian mummy on loan from the British Museum. Another was a torture chamber with an empty chair – would you want to sit in that? A famous exhibit was an artist, Michelle Griffiths, who every day for several hours submerged herself in a tank of water, the photographic evidence to this day has a very chilling quality to it. Another now well-known exhibit was a sound art piece by Janek Schaefer “Recorded Delivery” which consisted of a sound-activated dictaphone recording its own journey from a post box through the mail system and arriving at the storage facility.

It sounds like the project was successful in its aims – it was essentially a collaborative experience not only the artists, but also for the visiting audience who had much to explore, discuss and interact with as they went around. Rather fortunately for an installation at this time, there is a fair amount of documentation, photographs and recordings that are available online which can give us a feel for what it was really like. There is a site from the Artangel commissioners which can be visited to read more about how the project came to be, and also see what some of it looked like.

Here is a radio interview and walk through the exhibition with Brian Eno:

And of course you always wanted to hear what the postal system really sounds like.