Living in a storage unit 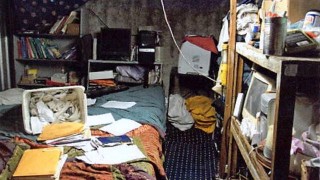 We have previous blogged here about running a business from a storage unit in a comfortable and affordable manner, and decided that it’s a perfect solution for smaller businesses as they climb the ladder. However, would you ever consider taking it further and have your household within a storage unit?

It may sound like a fun idea just to try for one night, or a thought in the back of one’s mind to save money and grief during tough times, but living in a storage unit is just not going to work out. First of all, it completely contravenes many storage contracts as these are business premises, which are legally not usable for people to use as homes. They lack a lot of the facilities that we often take for granted at home – it would make for an incredible deluxe storage facility out of our price range to have easy access to water (hot and cold), toilet and bathing facilities, electricity, internet and a fully kitted out kitchen. That’s not to say you couldn’t put in some make-do arrangements, like washing in a lake or public toilet, eating from a local fast food store and so on, but ultimately the facilities are simply not cut out for human habitation, and should the worst happen then the storage company themselves may face some liability. They obviously don’t want this, and you shouldn’t encourage it.

It is a wacky and amusing idea, but sadly when you come to research it, some people have used cheap self storage units as a place to live, and over time it has dissolved into a smelly and depraved situation. If the storage facility isn’t climate controlled prepare for some unbearable conditions with stuffy airless summers and freezing winters. The notoriety of storage units filling up with human waste, trash and drugs doesn’t bear thinking about, and it is certainly not suitable for children! Not least, once other users of the property get wind of it, you will be kicked out pronto as the last thing the storage company wants is a bad reputation for allowing this sort of thing to go on (although several less reputable places have been known to turn a blind eye to it).

Storage facilities will use all manner of tracking to ensure that people are not misusing the property and are kept safe at all times. They have CCTV to deter burglary, but also wrongdoing on the premises. Likewise they should have a means of clocking people in and out when they enter or exit the facility – this is simple health & safety, but also has sound reasoning in ensuring nobody is staying on site after closing time. Some storage facilities with a history of trouble have even arranged for random patrols from the local police force, to check that nothing suspicious is going on.

So in brief the idea is flawed in many ways, and we would not endorse in the least. However in its defence, whoever did this to their storage unit is nothing short of genius.

« Storing belongings for a long holiday
Can I put a musical instrument into storage? »